Tracing My Bongo Burgers: A Day on the Farm, Part 5

This series of posts describes my recent trip to Bobolink Dairy Farm.  I decided to break it into chunks because I apparently have a lot to say about it.  Today’s entry finishes up the cheese-making process.

As the milk starts curdling, Jonathan draws on his engineering background and draws the exponential growth rate over time on a makeshift graph, illustrating the point of the curve that we are going to add our final ingredient, which will stop the milk from turning into yogurt and instead make it draw together to form cheese.  It’s a special enzyme, we learn, one that comes from the stomachs of calves (and all mammals): rennet.  This enzyme will cause the proteins to coagulate and separate into curds and whey.

It’s all well and good to draw graphs and whatnot, but there is no way to know exactly when the right time to add the rennet really is, according to a clock.  Instead, we have to once again rely on our senses.  We smell the milk, looking for sour notes, and taste it, looking for the same thing.  After twenty or so minutes, we can all smell it, and the flavor is different, acidic, and we’re ready.  In goes the rennet.

When we get back, we can see the coagulation starting.  The white is thickening and pulling away from the edges of the big pot, and a yellowish liquid is collecting there: we have curds and whey.  Jonathan, using a thermometer, shows us when the curd is ready, and again, it’s the feel we are looking for, not a set time.  The sharp prong inserted into the curd resists slightly before snapping, and we are ready to go.

Jonathan and Lulu gather the molds: 4 small circular ones (for Amram), 8 pyramids (4 for scooping, 4 for making the Tower of Bobol cheese), and a large circular ring (for Baudolino).  Next, he shows us how to cut the curd to release the whey: parallel slashes all the way across, then slashes perpendicular to the first set.  He then uses a strange looking spatula-type device (it originally came from a Korean store, he explains, and has no idea what it’s original purpose was) to cut down through the curd in a spiral all the way to the bottom, leaving the curd essentially in rough-looking cubes.

Since he needs whey for tomorrow’s milk, he sets a plastic colander on top of the cheese and presses it down, pushing the curd away and filling it with whey.  A few passes with the ladle, the container is filled, and put away for tomorrow.  Now we begin filling the molds.

The curds are soft and pliable, like soft milk-flavored Jello.  We carefully scoop and fill the molds, letting the whey flow from the holes in the molds to collect in a waiting jug, which the pigs will enjoy later as their feed.  As we go, he explains that different cheeses can be made by waiting long for the curds to tighten, making firmer cheeses, and for cheddar the curds can even be agitated to draw them together even tighter.  We aren’t making them, but the time we take to fill the molds will make a difference: the Amram (the first molds) will be softer than the last mold filled (the Baudolino).  Of course, the surface-to-volume ratio of the molds themselves will also make a big difference as well.

Now it’s time to wait for the cheese to set.  Instead of standing around, we accompany the young farmhand out to feed the pigs.  There are two left, Ribs and Bacon, from a dozen or so the farm had acquired last spring as piglets.  As we leave, Jonathan jokes that some farmers turn whey into ricotta: he turns it into prosciutto.  The farm doesn’t breed their pigs, just eats them or sells their meat as the year goes on.  Bread scraps from the day before along with a ruined dough or two round out the meal for the two pigs, and if you’ve never seen a pig eat before, you’ll gain a better understanding of the “greedy pig” phrase after seeing it in action.

The pigs jostle and scuffle for the bread and whey, and we head back inside to check on our cheese.  The curds are settling, and we flip the molds and try to free the holes in them of the curd that wants to collect there.  And that’s it.  The cheese will be flipped occasionally for the rest of the day, but we’re done: tomorrow they will be salted and the next day they’ll be placed in the cave to begin the aging process.  We made cheese. 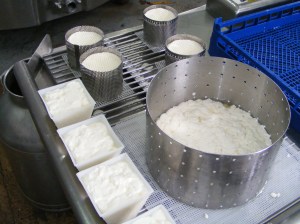 In Part 6, we make lunch, visit the Cave, and learn about Bongo and Hamlet.

Posted on February 9, 2011, in Kerfluffle and tagged Cooking, Happiness. Bookmark the permalink. Leave a comment.