If I Could Have One Superpower…

It’s 8 o’clock PM. I am getting ready for bed (yes, I go to bed at an hour that your grandparents would envy. The alarm clock starts going off at 4:30 every weekday morning so we can try to get up and exercise before work. No, it isn’t fun.). My wife is washing her face. She turns to look at me in the mirror, brow furrowed and face intense. “I have a question,” she says, using the tone that I know marks the beginning of a serious discussion. I put on my serious face, ready for a deep and thoughtful interaction. She pauses, then says, “If you could only have ONE superpower, what would it be?”

Whoa. This is heavy shit right before bed.

END_OF_DOCUMENT_TOKEN_TO_BE_REPLACED

Holy Shit, Do I Need a Vacation

Hidey ho. For the past few days, I’ve been contemplating new blog posts. My last one, though, is a hard one to follow. I’ve struggled with writing some pointless angry rant about flip-flops or some other equally stupid shit when the last thing I wrote here was a heartfelt and painful goodbye to a friend I wasn’t ready to lose just yet. It just didn’t feel right to me. I’m sure if Carl was here, he’d insist that I write some stupid piece of shit drivel because that’s what I do, and he wouldn’t want me to change.

So I’m trying. It’ll be drivel, no doubt, and useless, but it’ll be something, at least. END_OF_DOCUMENT_TOKEN_TO_BE_REPLACED 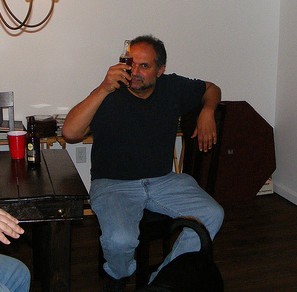 Cheers to you, buddy.

I don’t know if I’ll be able to write this. I already know it won’t be as good as I want it to be, or as good as he deserves, or really convey how I felt about my friend and the role he played in my life or how important he was to me or how much I’m going to miss him or any of those things. But I have to try, because my brain won’t stop trying to write this, and so I’ll try to put it here. My shitty little nothing blog is no place to try to immortalize one of the greatest people I’ve ever known, but it’s all I have, so I’m going to try.

Carl Spicer was one of my friends. The word “friend” does a bad job conveying the role the people who are important to me play in my life. My friends are my family, the ones I have chosen to surround myself with. I love them all, quietly but fiercely. I don’t show much in the way of emotion, generally, so it isn’t something that I usually convey overtly. But those people that are part of my life, that I am lucky to know and be close to, are as important to me as any blood relation.

Carl was a very special person, to me and to everyone he knew. He was kind, gracious, warm, genuine, funny – really and truly, he was one of the best people I’ve ever known. I never heard him say a cross word about anyone – he’d bust balls with the best of them, but I never once heard him demean or complain about anyone. I am sure he lost his temper from time to time – he was Italian, after all – but I never saw it. He was calm and generous in words and deeds. I compare myself to him and I am humbled. He’ll always be a better man than I can be.

He dealt with cancer for a long time, but this past Friday night his fight was over. He was 51 years old. Too young. Just too fucking young. He deserved more and better. I get angry when I think about it and I want to rant and rave and it’s taking everything I have right now to not let myself do that. I’m pissed off that the sun comes up and the fucking world spins and everything looks like it just doesn’t matter that he’s gone and I’m doing a terrible job right now keeping it together and not getting furious again.

I’ll never be able to tell someone who didn’t know Carl what they missed by never meeting him. That makes me want to cry, that I just don’t own the words to impart the man that he was so that a thousand years from now in some way someone who read this could feel a pang inside themselves and feel just the vaguest sense of loss that gnaws at me right now. I envy the people that believe in an afterlife, sometimes. Right now is one of those times. They can convince themselves that it’s a just world and that one day when they pass they’ll be reunited with him. I believe there is no afterlife. I can’t convince myself otherwise. So I’m jealous.

But I will see Carl again, when I dream. Every time I stand on my deck he’ll be there, sitting down with a beer in front of him, smiling. I’ll see him in the eyes of my friends, and I’ll hear his voice echoing from the walls of my house and all the places he went. He made my life better by being in it. Now he’s gone, and my life will always be a little worse because of that fact. But I’m grateful to have known him. I’m lucky. I miss you, Carl, and I’ll always miss you.

The last words he ever said to me were the same words he said every time we parted. “All right, guys, I’ll see you later. Take care.” I wish I could see you again, Carl, but I’ll do my damnedest to take care and make sure that the people I care about know how I feel about them. I want you to do the same thing. Tell the people you love how important they are to you, and look at them and squeeze their hand because you never know if that’s the last memory you’ll have of them.

The pulse-pounding excitement surrounding my Name a Book, Get Devoured contest has come to an end! After compiling close to a THOUSAND entries (uh, roughly estimated. It’s either 1,012 or 7, but it’s hard to say) they have been whittled down, mulled over, masticated, ruminated, regurgitated, and shifted to different stomach chambers for the final decision. Now, I am pleased to announce the lucky winner:

END_OF_DOCUMENT_TOKEN_TO_BE_REPLACED

The First Draft Beginning of Waiting on the Dead

It’s the first draft, so forgive me if it sucks. Let me know if it does, though, just so I can try to fix it.

Anyway, this is how it begins:

END_OF_DOCUMENT_TOKEN_TO_BE_REPLACED

Yeah, I Said I Wasn’t Gonna Do This, But…

As you may know (or may not  now but will have full knowledge of the facts that others have at their disposal by the time you finish the sentence that continues just after the closing parenthesis here), I’ve been struggling to finish the sequel to The Curse of Troius. I’ve been wrestling with it for over a year now and it’s mostly done but the last bit is going to really take every shred of skill I have as a writer and I’m just not good enough to do it right now.

While I’ve been engaged in mentally grappling with it, I’ve gotten an idea for my next project. I’m really excited by it. If you like my blog, then I think you’ll probably love it, since it takes the things that seem to mostly work here and puts them in a novel. Yes, it’s a zombie story.

END_OF_DOCUMENT_TOKEN_TO_BE_REPLACED

Here’s a Whiny Personal Post You Don’t Care About, But It’s My Blog So Deal With It

From last Wednesday (June 29th) to the 4th of July, I was on vacation. The purpose of that was mostly for a wedding on Saturday, one in which I was both the best man and also the officiant (which means I performed the ceremony – I’m a minister don’tchaknow). It also included my birthday and a BBQ blowout party for friends on Sunday. That’s why there were no posts here, why I wasn’t on Twitter or Facebook much, and why I didn’t read my personal email.

My birthday was good – low-key, the way I like it. Marking my progress to old age isn’t something I revel in, and I absolutely hate getting presents from anyone who isn’t my wife so low-key works for me. My wife is the greatest person in the world, and not only because she buys me books and toys for my birthday. That last part helps, though.

END_OF_DOCUMENT_TOKEN_TO_BE_REPLACED

Posted in Self Reflection