It’s a win-win, right? You do the writing, I copy and paste it, slap my name on the cover, and pay you in those most priceless of gifts, an Acknowledgement and a death in print! (It’s priceless, you see, because I will not be paying you in actual money in any way, therefore having no price for me whatsoever.) I mean, who could pass up a deal like that? You won’t find a better one – well, at least maybe a more honest one – in town!

OK, so now this is where I explain that I haven’t gone completely off the deep end, thereby invalidating the prize for everyone who had April 17th 2013 in the pool for Yep, Alan’s Finally Snapped and Needs a Burly Escort to the Rubber Room.

END_OF_DOCUMENT_TOKEN_TO_BE_REPLACED

Tags: It's About Platform People. Or Is It Brand? I Can Never Remember, Short One, Writing, Zombies

The Storm of Northreach Is Now Available. So There’s That.

It’s official. The most popular zombie fantasy novel series in Bear, Delaware has the next installment available for mass purchase. The Storm of Northreach, Book Two of the Northreach Saga (see, I always wanted to write a saga. Trilogies are for the organized. A saga, man, that just sounds epic. Had to write a saga.), is now available for purchase in paperback form. With a limited edition cover, no less, commemorating my friends and loyal supporters at The Days of Knights in Newark Delaware. In fact, DoK’s has signed copies you can buy, right off the shelf, like it’s a book or something. If you can’t get to DoK’s, though, you can get Storm through Amazon. It won’t be signed, but that’s your problem. The Kindle and other ebook versions will be available soon, so have patience, you loyal rabid followers, you.

In the meantime, the fantastic Candice Bundy has interviewed me over at her blog where I expound on literature, wine, and chocolate ice cream. Check it out, then make fun of me in the comments or behind my back or wherever, it’s all good.

Finally, here’s a link to an excerpt from the novel that gives nothing away of the main story but gives you an idea of what the books are like. Note the hilarious estimate of Storm being a 2011 release. Hahahahahaha! Still, it’s a saga.

In case you’re curious, here’s the description of The Storm of Northreach, Book Two of the Northreach Saga (you can’t tell me that when you say Saga in your head that it’s not done in a James Earl Jones-esque voice, all weighty and full of gravitas and shit. Saga. Saga.):

The storm is breaking, and the undead are loosed.

The legacy of the insane necromancer Troius lives on. Now freed from his control, the scattered remnants of his undead horde stalk the isolated hamlets of Northreach. The survivors of the destruction of Daneswall seek shelter from the oncoming storm, while soldiers of Baron Northreach are sent to investigate the strange message sent by the Baron’s son. Meanwhile, the city of Anticus, proud and insular, ignores the troubles of the backwater region of Northreach, unaware of the torrent bearing down from the north.

Tags: It's About Platform People. Or Is It Brand? I Can Never Remember, Northreach Saga, So META!, steve montano is the coolest man in the world, Writing, Zombies

Pretty much on exactly the same day that I got picked for my incredibly prestigious award (I’m still waiting for my statuette. I get a statuette, right?), I also got hit with something else. No, not the bus that many people have waited years for, but something that’s actually pretty cool. I’ll let the awesome Candice Bundy explain:

The rules for this one are quite simple: 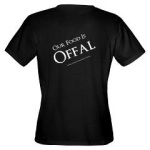 Also available in an attractive v-neck for the ladies!

In her post, she asked, as an offal lover, for a bit of Waiting on the Dead. Her request hit me at a pretty difficult time in my writing. In short, I hate it. I’m good with the blog posts, but halfway through the editing of The Storm of Northreach I just hit the wall. It’s not good enough. I’m not good enough to fix it. You know, the typical angsty writer bullshit that every one of us whiny little narcissists go through periodically. Well, fine, that THIS whiny little narcissist goes through from time to time. I’m trying to get through it, there are a couple of things that need to be addressed, and part of it has nothing to do with writing but involves the other production shit and WHINE WHINE WHINE I WANT A PONY.

I hope to be over that soon.

END_OF_DOCUMENT_TOKEN_TO_BE_REPLACED

Tags: Excerpts, It's About Platform People. Or Is It Brand? I Can Never Remember, So META!, Whining, Writing, Zombies

Welcome to the Blog Home of Tabula Rasa, Indie Author

Welcome to my blog. What you see is what you get.

Anybody that reads my blog with any frequency knows what an eclectic mess of random subjects and styles and curse words it is. Everything is just strewn around everywhere, making my blog a hoarder’s living room. Exercise reviews lay piled up on NFL season discussions, writing “advice” tossed all over a collection of Walking Dead reviews so filled with vitriol that a puddle of green ooze is slowly spreading from them, all with an occasional sprinkling of excerpts from my work like rat droppings behind the cardboard boxes of everything else. It’s a mess. And like any committed hoarder, I refuse to clean it up. I don’t care how many experts tell me I should. I am going to remain here, squatting in the fetid morass of my own filth. Well, filthy collection of random thoughts, rants, reviews, and bouts of whining.

Oh, and it’s all my opinion, just like this piece here. It might be wrong, but it’s wrong with a string of eff-words splattered all over it.

Of course, this means I’m Doing It Wrong.

END_OF_DOCUMENT_TOKEN_TO_BE_REPLACED

Posted in Philosophizin', Rantin' and Bitchin'

Tags: Annoying Things, It's About Platform People. Or Is It Brand? I Can Never Remember, Shitty Advice, So META!, Speechifyin'

You may have noticed… oh, you didn’t? OK, well, move your eyes over to the right side of the screen. There. Yep, now, below the book cover… almost… there you go! By now you’ve seen the picture of a t-shirt on the right side there. That’s right! You now have the opportunity to purchase the EXACT SAME SHIRT worn by the protagonist of Waiting on the Dead: A Zombie Survivor’s Story. You too can pretend to be a server at Raphaelo’s, just like the guy in that book you haven’t read because it’s not finished yet. WHAT MORE COULD YOU WANT? On the pocket you have the name of the restaurant and in fine print below the name of the book. On the back the restaurant’s slogan – OUR FOOD IS OFFAL – is prominently displayed with the full book title in fine print below. And it comes in a multitude of colors like black! And black! Or even black!

How awesome is that?! It’s what I’m wearing! Well, and my wife, because I bought her one. That’s right! It comes in a fashionable v-neck for the ladies! What are you waiting for?! Besides dementia, incipient lottery winnings, the urge to waste your hard-won money, the book to actually come out, the loss of good taste, anything else in the world remotely worth spending money on, a relative that you hate and want to give a useless gift to, or a million other reasons?! Oh. OK. That makes sense, then.

From Waiting on the Dead:

There was a lot of grumpy sullenness as we took our new uniform shirts: tight black tees that said “Our Food is Offal” across the back. Let me tell you, it was seriously offal. It smelled offal, tasted offal, looked offal, and was offally expensive.

Tags: It's About Platform People. Or Is It Brand? I Can Never Remember, Short One, So META!, Zombies

Why Look! I Got Interviewed Again!

Steven Montano, the talented writer, accountant, and Haberdasher to the Stars, interviewed me for his site, www.bloodskies.com. I urge you to go check it out and learn fascinating things about me, get shitty advice, and read something that contains absolutely no profanity of any kind, even the mild stuff. After that, I urge you to check out Steven’s novels, Blood Skies and the recently-released sequel, Black Scars. Links for all of the different electronic and non-electronic (they call them “books” – quaint how they just drop the “e” and make a new word out of it) are at his site. Good quality entertainment at a cheap price – what more can you ask for?

Seriously, buy his books. You’ll like them. And he gets them out more often than I do, so you won’t get Jordaned, I promise.

Tags: Interviews, It's About Platform People. Or Is It Brand? I Can Never Remember, Shitty Advice, So META!, Writing

One of those Rules of Blogging that I never bother to follow is about post length. Supposedly, blog posts are supposed to be 400-600 words in length (that’s a total guess. I hate research. There’s this dude in my brain who looks like me and works like me, and when I wonder shit like “hey, what’s the ‘rule’ about post length again? How long?” the little Me looks up from the game he was playing or book he was reading or whatever he does when I don’t ask him shit and shrugs, takes a random guess at something someone in Memory once heard about, and goes back to what he’s doing. I should give him a raise. He’s my kinda guy.). The reason? People don’t have time to read anything longer than that. Anything after word 601 is just a blur of text that makes people feel all swoony. So unless they can see the end of the post from there, it’s too much. They have to stop reading RIGHT THEN. Some of those people are kind enough to warn the poor, misguided blogger that they’ve become a health menace, and so they take the time from their incredibly fast-paced, meaningful lives to comment on the post. Some will say Too Long, Didn’t Read – but that takes too much time to write. So instead, it’s become TL/DR.

END_OF_DOCUMENT_TOKEN_TO_BE_REPLACED

Posted in Rantin' and Bitchin'

Tags: Annoying Things, It's About Platform People. Or Is It Brand? I Can Never Remember, RAGE, So META!, Speechifyin', Whining

By Garsh, It’s a New Look

I wanted something that allowed Pages to be visible, so I could display a link to my riveting life’s story and more importantly, a place to describe my work in a little more detail. I might go back and add some of the nice things people have said about them. Just as soon as someone says something nice about them. Har har.

I hope you don’t hate the new look. I loved the last look I had, but someone smarter than I recently suggested that having access to pages talking about me and my work was a really good idea. Like most men tend to do, I let the thought rattle around in my head for a week before I figured out that I should do something about it. But I did! See?!

Hate on it in the Comments, or just lurk like the weird voyeur I always pictured you to be.

Tags: It's About Platform People. Or Is It Brand? I Can Never Remember, So META!