← Love You, Carl
If I Could Have One Superpower… →

Holy Shit, Do I Need a Vacation

Hidey ho. For the past few days, I’ve been contemplating new blog posts. My last one, though, is a hard one to follow. I’ve struggled with writing some pointless angry rant about flip-flops or some other equally stupid shit when the last thing I wrote here was a heartfelt and painful goodbye to a friend I wasn’t ready to lose just yet. It just didn’t feel right to me. I’m sure if Carl was here, he’d insist that I write some stupid piece of shit drivel because that’s what I do, and he wouldn’t want me to change.

So I’m trying. It’ll be drivel, no doubt, and useless, but it’ll be something, at least.

I am burnt the fuck out. The last month has been painful. Well, here, I’ll break down my year so far from a work standpoint: as an accountant, when the year ends, the “fun” begins, and those sarcastiquotes can’t get any more sarcastique. All hell breaks loose for me. January is payroll changes and tax forms and filings and international accounting deadlines. February is shifting companies to work on audit and the prep of financial statements. March is hopefully wrapping that shit up, then starting on the international audit. April is finishing everything that didn’t get done, then finishing the first quarter financials for the international company by the 21st. May is working on the other company financials. June brings news that we need to revamp how we do everything we do while still doing it for the remainder of the year. Then July 1 hits, and again I have 21 days to finish the international company’s financials, then I have to scramble to finish the other companies’ financials.

So, to reiterate: I am burnt the motherfuck out.

My wife’s company has slow times that nearly always coincide with my busiest times and vice versa. August is about the one time we have where things slow down enough for us both. We haven’t taken vacation, a real vacation where we actually go somewhere for a week and chill the fuck out, in a lot of years. This year we are. Next week. We’re going to GenCon, which is one of the Holy Trinity of Nerddom (ComicCon and E3 being the others). We will be surrounded by thousands of nerds like us, many of them in inappropriate costumes for their body type, or smelling like slowly fermenting cabbage, or both. I will drink way too much. I will smoke way too much. I will raise a glass to Carl with a big group of his friends and wish he was there. I will relax, because if I don’t, then I will Hulk the fuck out and people will read about me assaulting a parking garage with a cardboard tube.

I know I need it. Today, as I walked past my boss’ office, I did my normal ritual of pretending that I’m holding a detonator in one hand and pushing the button, causing a massive Hollywood explosion to erupt from the side of the building. I can feel the detonator: it’s slightly longer than my palm, about the thickness of a roll of dimes. It’s a nice flat matte silver color with a tapering series of cylinders towards the tip, which is a red button, slightly raised in the center, with a ring of concentric circles radiating from its highest point. My thumb always caresses the button before I push it as I walk past.

Yes, I really make the clicky motion with my thumb. Every day. Today I made a quiet but audible BOOM noise as I did it.

This is how I know I need a vacation.

I’m trying not to think about it being so close, since otherwise I’ll just sit here daydreaming and not do any of the things I need to do as I stare into space with a blank hum echoing through my head. But knowing it’s there makes me feel a little better.

Not nearly as much as hitting that button, though. Boom.

UPDATE: I’m thinking about being one of those people who dress completely ridiculously by busting out the Wez costume I put together a few years ago: 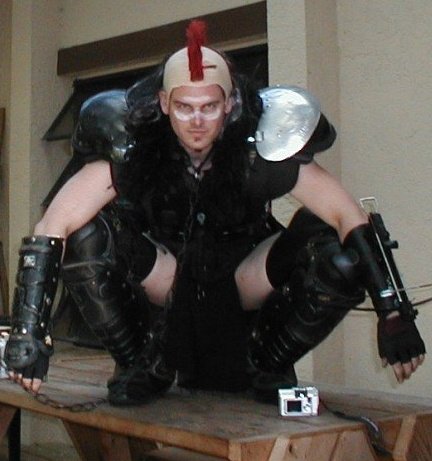 ← Love You, Carl
If I Could Have One Superpower… →