← The Republican and Democratic Parties Are Destroying Our Republic and Democracy
Cancer Feelings: Round 2 →

You don’t need me to tell you that 2016 was a very fucked up year. Many beloved famous people died, including people who helped define some of the most widespread cultural touchstones we have, from a princess to a professor to a candymaker to a spider from Mars, along with ground-breaking musicians, one regressive judge, comedians, athletes who defined entire sports and eras, giants on the world political stage, and more besides. Mothers, fathers, sons, daughters, brothers, sisters, pets – maybe you lost someone personally in 2016. It was the year that never seemed to quit taking. Seriously, go look a list of the famous people who died last year. I guarantee there are people on there you forgot about, and couldn’t believe you didn’t remember.

Also, there was an election, wherein a thin-skinned pissboy with less substance than an expired McDonald’s coupon became president of a nation whose espoused ideals stand in stark contrast to everything the tragic joke of a man set to lead it embodies.

OK, this whole blog post is coming out way more depressing than I intended. Sorry about that.

2016 was, for me, a year of great and exuberant joy and abject heart-wrenching terror. It began with my wife still in chemotherapy and me changing jobs. Along the way we celebrated an end to chemo and the triumph of remission, and in December we received the news of recurrence and the return of fear and uncertainty. My wife was consumed by months of study for the bar exam, then the rigor of taking it, followed by the interminable wait for the results (she passed, because she’s indefatigable). I got a chance to see places I’ve never been, from France (an unbelievable trip to the Loire Valley) to California (our honeymoon) to, and I shit you not, a trip to Austria where we were able to ring in the new year at a ball in an imperial palace. I was given the gift of song for my birthday, wrote my first story for our as-yet unborn children, went to the dentist for the first time in 20 years (don’t judge me), made my wife a magical wooden box to hold her crown, celebrated holidays and companionship, and mourned personally and for our nation. The year had pretty much everything.

And now it’s 2017. I spent the first weeks of it sick and feverish. Now we’re in political activist mode. Last weekend we attended a rally in support of the ACA and the provisions that saved my wife’s life. We got to meet state representatives and a Senator, tell our story to news outlets, even got a tweet from Bernie. This coming weekend we’ll be joining thousands of people to march in Washington DC. After that, it’s time for IVF procedures and getting ever closer to realizing our dreams of parenthood. 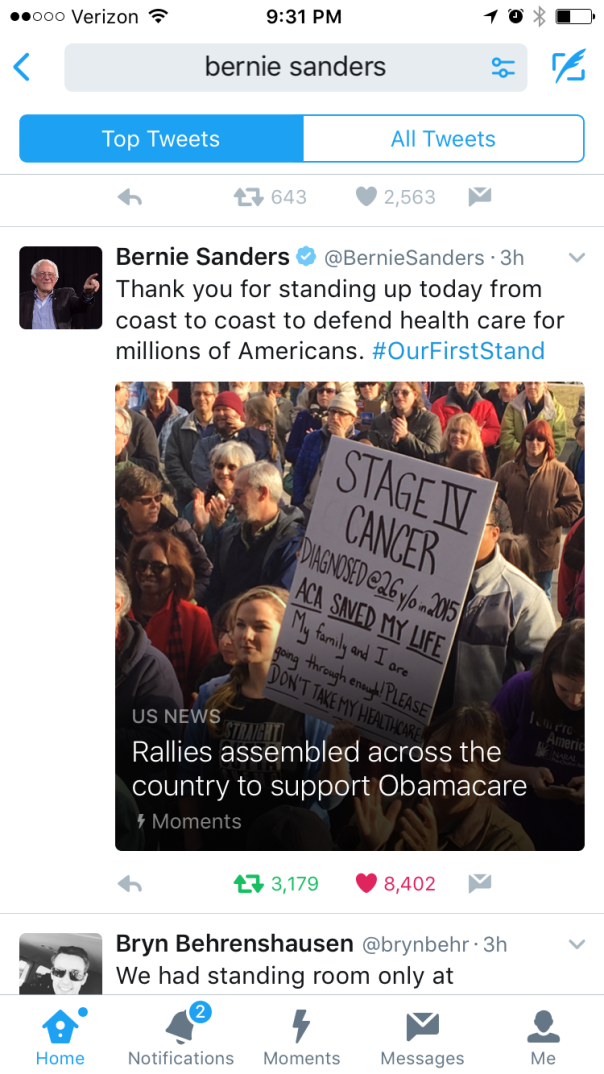 This was pretty cool, all things considered.

I don’t know what this year will bring for me or you or my family or my friends. I imagine it will be filled with hope and wonder, tragedy and despair, beauty and painful ugliness, just like all of them. I do hope, however, that it is a good year for you and me and all of us. Welcome to 2017, everyone. Let’s try to leave the world a little better at the end of this year than we found it.

← The Republican and Democratic Parties Are Destroying Our Republic and Democracy
Cancer Feelings: Round 2 →