The Word “Redskin” and What It Means to This Washington Fan 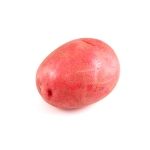 A redskin potato, or a red skin potato. The jury is out.

I’m a fan of the NFL Washington Redskins, in case you haven’t noticed. My first memory of being a live, thinking, and functioning human is of watching a Redskins game in the basement of our house with my father and brother (as they lost to the fucking Cowboys, because of course they fucking did). I inherited my love of the team from my dad and sibling and it’s been part of my life ever since. I’m such a huge fan of this team, in fact, that I can’t watch them play and haven’t watched a Redskins game in its entirety without previously knowing the outcome in years. I know that doesn’t sound like being much of a fan, but I care so fucking much about what is happening that I lose my ever-fucking mind. A first quarter third-down stop by the defense leads me to an expletive-laced tirade about how lame the opposing team is and how I wish them all to die in a cancer fire, and that’s for a PRESEASON game. When they win (rare!) it brightens my entire outlook and psyche. When they lose (often!) it sends me into a bitter spiral of anger and despair. I actually frighten people who have the misfortune to be around me when for some reason I can see the game.

Yes, I have a problem. No, that’s not actually the point of this blog.

Anyway, I’m a Redskins fan. In recent years, a clamor has begun over how racist and inappropriate the nickname is, to the point where many media outlets have a policy of not using the name, as it has been deemed a slur. That’s what I’m going to be addressing.

First off: for me, the name Redskin has always been about pride and tradition, of a team a loved whether they were shitty or not. The love of my Redskins actually made me more interested in Native Americans, their history and culture, as a whole. I was always an Indian when we played Cowboys and Indians as a kid. I always rooted for them in the Westerns. I cared about their mistreatment and genocide and circumstances that they live under today. I still do, because I was born a fan of the Redskins. So that’s where I’m coming from.

Five and a half years ago, a complete blithering idiot had this to say about the slowly building clamor for change to the nickname:

I have to admit, I’m a little confused about the whole thing. OK, so if I called an individual of Native American descent a Redskin, I agree that it could be an offensive term. If I indeed meant it as an insult, and he took it as one, then I have offended. If I were to call an African American the n-word, then I agree it could be an offensive term. In both cases, the intent has a lot to do with it. Were I to use either disparaging term to someone I didn’t know, of course I am being offensive. If, on the other hand, I use the term as a jest, sign of respect, or other means, then it might not be offensive. The person so referred would have to make that judgment. If my friend took offense, I would have to apologize.

However, every day we see and hear people use these supposedly disparaging terms in an entirely different way. Hip-hop music demonstrates that the term “nigga” is often used amongst friends, in some cases even as a sign of respect. The Washington Redskins are clearly not trying to make fun of American Indians. This is a people, or rather a large and diverse group of peoples, that European settlers robbed, murdered, and nearly wiped out of existence. So, after a few hundred years of genocide and exile, if we stop referring to a sports team by a term once considered offensive to a small group of people, then all is forgiven? Is the Native American plight really just that they can’t stand having mascots named after them?

Words only have power if it is given to them. If we decide that Milk is now an offensive term for white people, should a white person be offended when referred to as Milk? Why? Or conversely, why not? If I intend to offend you, I could use any word, provided my derision is clear. If you wish to be offended, then anything I say to you will be offensive. When I think of the term Redskin, I think of pride, valor, and a warrior’s spirit, not to mention 8-8 seasons and crushing losses to horrible teams (see: 2008 Rams and/or 49ers). And really, Redskin? That’s soul-crushingly humiliating? That’s the worst insult imaginable? If someone called me Whiteskin, I would have to laugh. No, don’t call me Brownhair! That’s demeaning!

That fucking moron actually wrote those words down for posterity and published them where anyone who wanted to could see them. Lucky for that dickbag, no one really read it or cared. It was one of the first things he wrote on his then-new blog. I’ll tell you his name, how you can get hold of him to harass him – I’m doxxing his ass.

The fuckhead’s name is Alan Edwards. His Twitter and Facebook pages are accessible at the top of the screen you’re looking at. Tear him a new one.

Fucking-a, I can’t believe I actually wrote that shit. I’m happy to say I’m a very different person now than I was then, ‘cause that guy was a cunt. I’d delete that post in a heartbeat, but I said it, publicly, and I’m not going to hide that bullshit even though it’s shameful and embarrassing and I’d love to.

Anyway, I’ve decided to restate my stance on the name change. I’ve been thinking about it a lot, since the outcry has only grown. I’ve already said how I feel about the name, and what it has always meant to me. So I’m going to say it plainly, and for all to see, and I hope it gives no one any offense.

The name Redskins needs to be changed. Now.

Yes, I’ve reversed my stance completely. The name is offensive and needs to go. It can be replaced by a million other things that evoke feelings of pride and valor, words that also aren’t racial slurs.

The catalyst, the final straw, for this determination was a story I read this week, about a Cherokee chief apologizing to members of the Cherokee Nation for sponsoring the Indian National Finals Rodeo in November. Why? Because that event was also sponsored by something called the OAF, the Original Americans Foundation, an Indian charity. An Indian charity started by Dan Snyder, owner of the Washington Redskins. A charity that doesn’t have a website, and when you look for it, it takes you to the Washington Redskins website.

An Indian chief had to apologize for sponsoring an event to support those Cherokee who had qualified for the finals because Dan Snyder and, by extension, my favorite team were involved.

As someone near and dear (and much smarter than me) told me, sometimes you have to look at the other people you’re standing beside when you take a side. I was standing with Dan Snyder.

Look, I understand Dan Snyder to a degree. He loves the team the same way I do. He grew up wearing a Redskins belt buckle just like I did. He loves this team, its traditions, its history, just as I do. He does what he does because he loves the Redskins.

None of that makes it right.

He’s behaved odiously through this whole thing, trying to distract from the furor by starting charities and using PR blitzes of fake Indian chiefs showing their peoples’ support of the nickname. He’s sued and lied and misdirected and been a general fucking worm about the whole thing, and I was supporting him and his efforts. I was standing beside him.

The word Redskin is a racial slur, plain and simple. It has no place being used on a national scale. It makes the rest of the world look at supporters of the team with derision above and beyond what is deserved for an inept, losing, embarrassing squad of recent decades. The name needs to go, apologies need to be given at every level – and not the bullshit kind – and things like the charity need to continue, not for the PR benefit but for the benefit of the people whose cultural identity has been adopted for an organization that sells expensive shitty beer and fields a shitty product on the field.

Also, I apologize, for the words I’ve used in the past and for supporting the retention of a slur for so long. And I’m not apologizing if you were offended – I’m apologizing because I regret my actions, and am embarrassed for them, and will endeavor to be a better person in the future.

Christ, what an asshat I was.