← Way-Too-Late Movie Reviews: Interstellar
Top Ten Inexplicable Names Rich People Give Their Sons Which Are Jobs They’d Never Allow Them to Do for a Living →

5 Things That Made Daredevil So Awesome

When I heard that Marvel was planning on making a Daredevil series on Netflix, I was skeptical. I didn’t know if they could do a Daredevil live-action story right, I wasn’t sure Netflix was a good place for it, I was afraid they were overextending themselves and by seeking too hard to spread the MCU (Marvel Cinematic Universe, in case you’ve just gotten out of a bunker Unbreakable Kimmy Schmidt-style, which by the way if you haven’t watched that show yet you really, really should, because it is seriously excellent) beyond the big screen and the not-the-greatest ABC shows (they are very solid shows that manage to not completely capture my interest enough to watch them week-to-week – more on that later) Marvel would risk their run of success by producing a bunch of mediocre stuff that would jeopardize the entire endeavor.

Now, that might happen someday, but Daredevil made me look like the idiot I am for doubting them.

Based on the reactions from my fellow Marvel fans on Facebook and Twitter and whatnot, as well as reviews from other non-fanboys, I wasn’t alone in my giggling gleeful delight at the result. Here’s why I think it worked so well. There are some spoilers here, so be warned.

All of the Marvel and DC movies get lumped into the same category: “comic-book movies”, as if every comic book explores the same themes and features the exact same things, just with different colored spandex depending on who the main character is. This makes as much sense as lumping every movie ever made from a novel into the same genre, but for some reason the label has stuck. Anyone can sit back and point out that The Winter Soldier is more of a political thriller than anything else, and wouldn’t lump that into the same genre as Guardians of the Galaxy. Different comic titles look at different things – the X-Men titles have always examined the theme of minorities in a hostile world, which is very different than Spider-Man’s explorations of the responsibilities accrued to those who have power, which is different than Batman and Superman’s exploration of just how much Mary Sue crap can be afforded to the titular characters until they can do everything and be everything and never ever lose.

Anyway, Daredevil has always been about street-level crime, the plight of the everyday dangers on the streets from drugs to human trafficking to corporate malfeasance and the injustice of the judicial system. DD does have superpowers, but they aren’t on a level with most other Marvel folks, so the stakes are simultaneously lower but also more relatable. DD has – especially during and after Frank Miller’s run – been darker in tone and more punishing for the main character (and his friends/allies) than other Marvel properties. More than a few Daredevil comics features DD still bandaged from a previous fight while going into the next one. The show captured all of these things very very well: The plight of apartment residents being forced out of their homes has a weight and impetus that wouldn’t make it into an Avengers movie. We see Matt Murdock defending someone who he thinks is guilty to the best of his ability, arguing correctly that it is not the jury’s job to seek justice, but to apply the law based on the facts of the case. Then he goes out and beats the guy up until he gives up the information DD needs, but hey, he did say that justice comes from outside the courtroom, so there’s that.

The last thing they did that I was really happy with was the inclusion of Matt’s religious beliefs as a core element to his character. That’s the kind of thing that often gets minimized when creating something for a mass audience, but it is a HUGE part of the Daredevil character and keeping it intact and part of Murdock’s motivations and struggles was integral to the success of translating the comic to the screen.

I have to confess that I actually really liked the Elektra movie.

Like I said under Reason #1, being Daredevil has generally been a punishing experience for Matt Murdock, and the show echoed that brutally, painfully, and awesomely. The fights were visceral and long, showcasing how difficult it actually is to beat the fight out of people who are paid to do it. Instead of being knocked out every time they got punched near the head or rolling on the ground for minutes after a single shot to the gut, the bad guys kept getting up, wearing down the hero and leaving him limping, battered, and bruised. The way the fights were filmed added to the visceral nature of the punishment – instead of a bunch of blurry quick-cuts that render the action frenetic and ultimately impossible to follow, the camera let you see action like an observer at the scene. I’m pretty sure I got sympathy rib pain after a couple of them.

Also, the evolution of Daredevil’s fighting style over the series was well-done. He starts out brawling like a boxer, with rope around his hands like a boxer’s tape, but when that isn’t quite good enough to get him through the fights without serious injury, he starts incorporating the skills he learned under Stick that he hadn’t needed for years. Again, they managed to pull the style from 2d static images into a live action show, which isn’t easy. The battles between Fisk and DD in the comics have always been speed and agility versus brute strength and power, and the show captured that both beautifully and brutally.

Bad guys are generally just shown to be, well, bad. The things they do are terrible and evil, they are rude and disloyal, sneering and obnoxious, all so we know exactly who it is we should be rooting against and therefore for. They are cartoons, a backdrop to illustrate the virtue of the hero. Everything is black and white.

Daredevil didn’t go that route. They dared to show Wilson Fisk as a human being. We get to see him fall in love with Vanessa and be loved in return. We see him interacting with his right-hand man, James Wesley, in a way that shows his trust and even affection for the man carrying out his orders. Wesley himself does things for Fisk that display his loyalty and caring that he feels for his boss, when most “bad guys” are known only for their duplicitousness and incompetence and ambition. Vanessa is loyal to Fisk not because she is evil but because she loves the man and believes in his vision. These behaviors are how normal, everyday people live, even the Madoffs and Skillings and other real-life villains. A great bad-guy doesn’t do things because he’s evil, but has motivations that compromise morality because they think they are doing the right thing. No one thinks of themselves as the villain – they are all just misunderstood heroes. Daredevil gets this. For Christ’s sake, I felt bad for Wesley (and Fisk) when Karen Page shoots the shit out of him, and this was a man who just threatened to kill every person Karen had ever cared for. They made villains that the viewer was capable of feeling empathy for, and that is some seriously powerful storytelling. 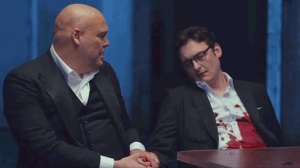 The Kingpin has feelings, too.

Lovers of a particular property or series or what-have-you like to have little things hidden in the story that speak to the greater universe that is being portrayed, and Daredevil did a great job with including those things that may not mean anything to the casual viewer and don’t need to be known for the thing to be watchable, but are cool when you know the reference behind them. Melvin Potter, for example, as the costume designer – he is a costume designer in the comics, but he’s also one of Daredevil’s oldest foes as the Gladiator. Hints to his costume are even in the series – in his brief fight with DD, he uses sawblades, and when he gives DD his costume, he sets the box on plans incorporating sawblades into a costume, which is part of Gladiator’s outfit. Also, Leland Owlsley is better known in the comics as The Owl, another long-time foe, and the part of me that loves comic books sees him bleeding after a fall (notorious in ambiguous comic book “deaths” that turn out to not be deaths later on) and imagines a future DD episode where the injured man is back as the gliding wrist-clawed Owl in all his dubious glory. I also hope that episode never exists, but I like to know it’s possible. Even the mention of “the Greek girl” was enough to make me giddy.

There are a ton of easter eggs throughout Daredevil, from Roxxon Oil to Stan the Man Lee and way more, none of which affect the storyline, but are a nod to those people who have supported the franchise for a very long time.

I wasn’t sure about Netflix being the right platform, as I said. Holy shit was I wrong. In fact, I think the Netflix model may be the perfect way to properly tell these kind of stories. The length allows the story to grow and breathe without forcing the plot to resolve itself quickly. The arc can be completed without killing off the archenemy of the titular character in his first appearance (something that the Batman franchises can’t ever seem to learn, which is hilarious to me). The lack of commercials eliminates the need for mini-cliffhangers in the middle of episodes to make people come back after being bombarded with inanity. Having all of the episodes available at once prevents a couple of slower episodes lead to dropoff in the audience (something that plagues me with Agents of Shield and Agent Carter). The ease of watching shows on multiple platforms makes the idea of having to tune in to network television at a specific time every week obsolete (again, something that hurts my viewership of AoS). The show being on Netflix can have characters cursing without censorship, enables the binge-watching that has become ubiquitous now, and makes the show easier to see. I want Agents of Shield and Agent Carter to be on Netflix, so I can actually watch them when I want to and without commercials for horrible things like We Buy Any Car infiltrating my soul.

Daredevil was a great ride, and I find myself imagining how awesome a Punisher arc could be (contrasting the approach of the heroes with the Punisher’s and allowing him to be a part of the MCU without the burden of carrying a whole feature film) or having Spidey and DD team up for something or even just exist in the same space for a time or how great Jessica Jones and Luke Cage and Iron Fist can integrate into a smaller-scale MCU, just like their comic-book counterparts do. The lesson, as always, is that Marvel (and Disney) know what the fuck they are doing, and I am an idiot.

← Way-Too-Late Movie Reviews: Interstellar
Top Ten Inexplicable Names Rich People Give Their Sons Which Are Jobs They’d Never Allow Them to Do for a Living →