Last night, I finally got around to watching the Season 2 episode of Community where the group plays Advanced Dungeons & Dragons (I know, I’m way behind the times, see this post for why). It was great, of course, presenting it in a funny way that still showed a love for the whole concept of table-top role-playing underneath (similar to how the movie Role Models approached LARPing – an endeavor silly and ridiculous like the movie shows, but worthwhile and a kick-ass time anyway). Ever since I watched it I’ve been thinking about tabletopping, something I haven’t done in a few years now, and growing up surrounded by the very books that were in the episode (and that still take up several boxes in the back room). I remember the Satanic backlash and having to explain to my mother that I was aware of the fact that magic wasn’t real and that raising an army of the dead wasn’t something I could actually do – a fun conversation, lemme tell you – and all that Jack Chick nonsense. Growing up with that stuff had a huge impact on my life. Without it, my two books don’t exist, I never would have written my own multi-volume system, and I never would have gotten so interested in rules systems that I probably never would have ended up an accountant.

I actually kinda have been invited to join a coven, but it wasn’t nearly as awesome as this one.

You know, maybe Jack was right. That shit has ruined my life.

Anyway, I was thinking about all this stuff and my mind drifted to Iron Crown Enterprises (ICE), by far my favorite game company of all time. As a huge Tolkien nerd, I was drawn to their ads for Middle-Earth Role Playing (MERP) in Dragon magazine (ahhh, Dragon… I still have all my issues, which means that I might have issues of an entirely different sort but whatever) and started buying everything they had. I went from MERP to their main system, Rolemaster, and fell in love with it. Because I am clearly a lunatic. 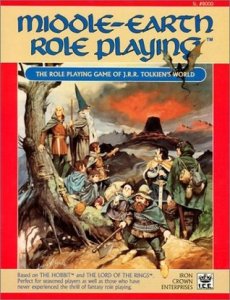 Take heed: this book is a gateway drug to copious amounts of Excel abuse.

Why a lunatic? Because Rolemaster has earned its nickname – Chartmaster – a thousand times over. Every rulebook is practically nothing but one bound book full of charts. Charts for everything. Weapon charts. Moving maneuver charts (which you would consult based on what you were moving and doing – climbing? This chart. Running? This chart. Yes, there was a chart to see how well you ran). Static maneuver charts (like moving maneuvers, you see, but for when you are standing still. Picking a lock, disarming a trap, buying something from a merchant. Yes, conversations could have their own chart). Weapon charts. Critical charts. Charts of charts. A Rolemaster rulebook was basically spreadsheet porn. 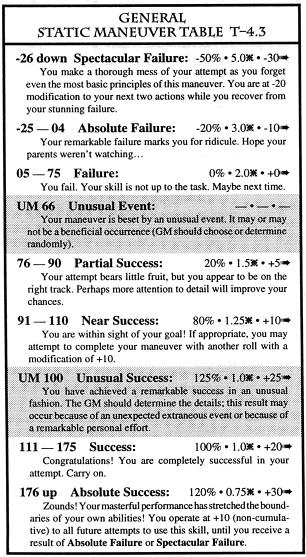 This is a simpler, general table. Piece of cake.

As you can imagine, actually playing the game was pretty untenable. You want to climb a rope? OK, roll percentile dice to get a random number from one to one hundred (except if you roll a 01-05 – then roll again and subtract what you rolled from the initial roll, and if that roll is 96-99 then you roll AGAIN and subtract that result too, unless you roll 01-05 at any point then you roll again and this time add that number to offset the negative number you’ve gotten so far, and keep going ad infinitum until you roll something that is not 01-05 or 96-100 and you can stop, otherwise you’re stuck doing it forever. The same applies if you roll a 96-100, but then you add the next roll, unless it’s 01-05 then you roll again and subtract like noted above, so you end up with a number between negative infinity and infinity, unless you roll a 66 or 100 on the first roll, which means you don’t add any modifiers to it at all and you – you know what? Never mind), take your skill number (anything from, say, 8 to 136) and add it to that number, subtract the penalty related to one of the 20 different armor types you might be wearing, add the bonus from any item you possess that may affect your ability to climb (like, say, your Dwarven Crampons of Sturdiness which add +15 to any Climbing MM), apply the modifier based on how difficult the particular climb might be (from like +35 for a Routine situation – like, gym class, I guess, unless Peggy Sue is watching and you’re twelve at which point the attempt becomes Very Hard -30 unless she’s wearing that one sweater and then it’s Absurd -70), then apply any other modifiers that the GM (Game Master, for the uninitiated/non-coven members) deems appropriate, so you finally end up with a number from minus-eleventy-billion to plus-googplex-thousand, and you take that number and consult the chart, and it tells you the percent of the maneuver you have thus far completed during your turn, like for example 65%, which means on your next turn you have to do all of that again to get the remaining 35%, but you could also fail and fall and take damage which moves to its own chart that is just as complicated.

Combat was just as insane. You had your Offensive Bonus (OB), from which you would subtract the opponent’s Defensive Bonus (DB), and then you’d roll the percentile dice like above (again, a roll of 01-05 means you roll again and a 96-100 means you roll again and etc), consult the chart for the weapon you are using, cross-index the result you got from the roll with the Armor Type your target has (1 through 20) to figure out how much damage you did if any, plus any critical result (listed A through E) if any, and if there is a critical result you roll on another chart to see if there is something specific you did like break a limb or sever a tendon or cut off their head – UNLESS you rolled really really low, then it’s a Fumble, and then you roll on a different chart to see how bad you messed up, from blanking out for a second to dropping your weapon to ramming a random iron spike into your own eye and dying on the spot, and everybody gets to do this on every turn, and a fight between two players and an innkeeper could last 6 hours. 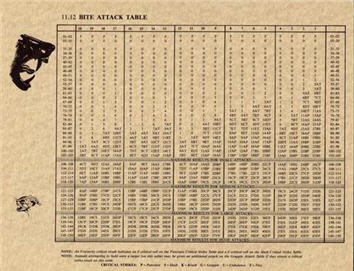 One of approximately 10,000 different attack tables.

I did not love this game for these reasons. OK, that’s a lie. I loved Rolemaster because of and despite these reasons, but I love spreadsheets and rules and am clearly unhinged.

Anyway, the thing I really and truly loved about ICE was their Middle-Earth sourcebooks. See, they had the actual license from Tolkien Enterprises to publish Middle-Earth related material. And damned if they didn’t deliver. They’d take a region – say, Northern Mirkwood – and provide a timeline of events straight from the LOTR appendices that involved the area, provide descriptions of flora and fauna of the area, different peoples and their history, notable individuals, maps (oh, the maps – some were huge foldouts that would connect to a different region’s map, so you would end up with these huge detailed maps in the same style of Tolkien’s maps and they were glorious and frameable), details of locations – on and on. They also had modules (for non-coven members, a module is like the script for a specific play – it has the setting, hooks, and plot all laid out for you, and the players go through that loose script like an improv team) but they were nothing compared to the huge sourcebooks that the GM would use to create his own adventures. The art was lavish and beautiful (mostly) and, even though they had to make up a lot of shit to flesh out the world, it all felt right. The people who worked on this stuff loved Tolkien like I did, and their attention to detail and getting the feel right was second to none. They even did Choose Your Own Adventure-type books set in Middle-Earth, as I’ve talked about before. 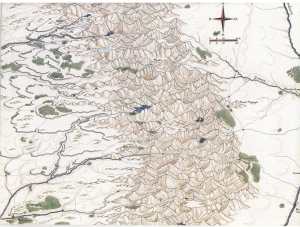 A tiny part of one of their maps. These maps, man….

Eventually, Iron Crown (named after Morgoth’s Iron Crown where he placed the Silmarils, of course) went bankrupt due to distribution problems and lost the Tolkien license in 2000, which passed to a different company that made a much easier to play and far shittier game (based more on the movies and including nothing that wasn’t specifically referenced in the books, which kind of narrowed down the scope of the world). ICE exists today after changing ownership hands a couple times, and they have a new system that is like Rolemaster but less eye-gougingly complicated called HARP that I of course don’t like as much because I apparently hate myself. You can get all of ICE’s books digitally now – except for their Middle-Earth stuff, of course, which is really the best stuff anyway, but I’m glad ICE is still around. If it wasn’t for them, my knowledge of Middle-Earth would not be nearly as vast and utterly pointless as it is now, and I might have been able to enjoy the Jackson movies much more. Who knows. 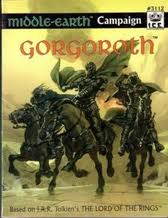 I mean, look at that cover. Beats Peter Jackson’s Nazgul with a bat.

So here’s to Iron Crown Enterprises, and Rolemaster, and Middle-Earth Role Playing. You took up a lot of my time and money. I regret nothing.

Posted on April 2, 2015, in Kerfluffle and tagged Gaming, Nerdery, This Is Probably Something I Should Have Kept To Myself. Bookmark the permalink. 3 Comments.