The Return of the Aravan Awards, 2014 Edition

A few years ago, I gave out awards in random categories for the following reason:

…Coming up with a top ten list has to be the easiest writing job in the world. Jot down ten things, come up with superficial reasons for their inclusion, and then explain how blatantly wrong you are as just “a way to get people talking about it.” It’s the ultimate mail-it-in, who-gives-a-shit approach to writing.

So I am TOTALLY in!

I followed it up with the Second Annual Aravan Awards for 2011, then didn’t do one for 2012 or 2013 because my life fell completely to shit and it took me a while to climb back out of it. But now I have, so it’s time to dust off the formulaic and simplistic content generating machine… 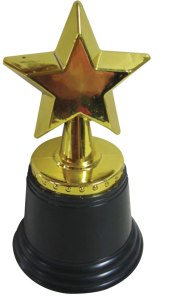 The most-coveted shitty plastic trophy presented by someone named Alan Edwards in the entire galaxy.

What are the Aravan Awards, you probably didn’t ask? I’ll tell you anyway! The Aravan Awards are completely arbitrary awards in arbitrary categories that I give out for arbitrary reasons. For example, the 2010 Aravan Award for Best Movie I Watched in 2010 went to Pulp Fiction, which did not come out in 2010 and I’d seen years previously but happened to rewatch it in 2010 and it was better than anything I saw that year. So you know what you’re in for. Plus, the awards are arbitrary because I don’t always remember what year something happened, so it’s kind’ve a grab bag of Shit That Happened At Some Point. Bear with me. The Aravan part of the awards name comes from the pseudonym I originally used here until I published my first book and changed the blog over to my real name (OR IS IT?!?!) and I’ve stuck with it because Tradition. And now you can’t un-know any of that useless information.

Anyway, on to the cheap shitty statuettes!

This is traditionally the first award I give out, so why break tradition? As I said earlier, the 2010 award went to Pulp Fiction, and 2011 went to Sucker Punch, a movie I absolutely love and don’t feel bad about that fact at all. For 2014, the nominees are:

And the winner is….

I know, I was kinda surprised too. I loved GoG and EoT so much that there was a real challenge in deciding between them, so I went with a tried and true tiebreaker: if you’ve been told for much of your life that you look like an actor, and he’s in a movie that is tied for an irrelevant award, you go with the guy you look like.

Bonus points for the fact that Bill Paxton’s character reminded me so much of my brother that it was like growing up all over again.

I am fairly certain this picture was actually stolen from one of my family’s Christmas albums.

This goes to The Interview. So much fuss for a limp movie starring the Worst Human Ever (Non-Dictator-and-Serial-Killer Division).

Seriously, I watched a metric shit-ton of movies in 2014, mostly in the theater. Probably saw more movies last year in the theater than the last 15 years put together. I blame the Clockwinder.

The 2014 Aravan Award for Comeback of the Year, TV Edition

A lot of people didn’t like Agents of S.H.I.E.L.D. for the first half of the season, and it really did starting kicking ass after Cap 2: Bucky’s Back (spoiler), but I liked it from the start so it didn’t have anything to come back from. Nope, the clear winner is Game of Thrones, a show I stopped watching in the first season. Last year, though, I noticed that my favorite scene involving pigeons and pie from the books was about to be shown, so I decided to give it a gander, and holy shit did I fall back in love with the show. Actually, it was less falling back in love and more like kinda dating someone for a while because you’re bored then you break up with them then you see them again and you’re like HOLY SHIT because they look amazing and 50 times better than they did the first time around and so you fall totally head-over-ass into love/lust/desire/whatever and you binge-watch the shit out of them and they can’t tell you to fuck off for ditching them before because they’re a TV show and can’t actually control who watches them and the analogy has kind of fallen apart but that’s basically what it’s like. 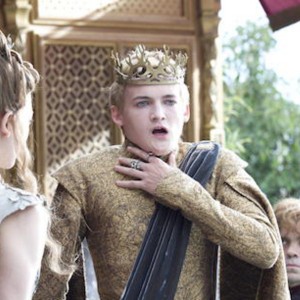 It’s a good thing openly rooting for a child to die is OK if they’re a fictional character.
Alternate caption: a young Tony Romo.

This goes to the Washington… uh, what should I do now? If I call them by their name, I’m perpetuating the use of a slur that I find I can no longer defend in terrible fashion like I used to. Anyway, the award goes to Washington, because if they can’t be good, then beating the Cowboys on Monday Night Football and knocking the Eagles out of the playoff hunt will do just as well. GREAT SEASON GUYS! Seriously, if they had beaten the Giants at least once I would have staged a mini-parade using Legos.

This one’s easy. I love Whimsy and Warpaint, because it’s smarter and funnier and more topical than anything I’ve ever written.

The 2014 Aravan Award for Book of the Year

Congratulations to The Sea of Time by P.C. Hodgell for the win. The continuing series about Jamethiel and her adventures is a delight, and I recommend it to everyone because it portrays a rich unique fantasy world and removes the anti-feminist tropes that dominant fantasy literature and instead radically features things like female characters having conversations that are not about men and female characters who are not just wives, mothers, damsels, or love interests for the main male character. It’s weird, like women are human beings of their own! Anyway, the Kencyrath Chronicles are well worth your time.

The 2014 Aravan Award for Man of the Year

Nick Offerman, take a bow! Yes, he’s great as Ron Swanson, but if you haven’t seen his stand-up special on Netflix yet, do so now. Please, and thank you. Right. Now. Seriously. This shitty blog post can wait. Not only is he an awesome example of what I think a man should be, he also name-drops both Galactus and one John Ronald Reuel Tolkien. I love how he talks about his wife, I love his giggly laugh, and I love him in a manly fashion.

The 2014 Aravan Lifetime Achievement Award for Douche of the Year

The one, the only (at least there’d better be only one), my nemesis, James Franco. When your shitty movie causes the biggest corporate hack of all time (as scientifically measured by Me and My Shovel’s Resident Expert on Ranking Things, Alan Edwards), you are an all-time douche. Plus he published a chapbook (/wanking motion).

The 2014 Aravan Award for the Best People in the World

As always, this award goes to you guys, who somehow manage to make it through these blog posts. I seriously have no idea how you do it, but I appreciate the shit out of it. You have no idea.