← It’s Time to INHALE, Everyone. My Twinsie’s Book is OUT!
The Tactical Guide to Snake Plissken’s Hair →

Kendall Grey knows how to do shit right. She’s organized, has a plan, executes it, all while maintaining her sarcasm-slinging attitude and foul-mouthed proclivities. In comparison to her, I am a slacking lazy bum who can barely raise the energy to write a blog post.

Of course, I’m a slacker compared to Spicolli, so that’s not the highest of praise, either.

Anyway, Kendall’s new cover art for the third and final book in her Just Breathe urban fantasy trilogy is being revealed today. Because I adore her muchly, I want to share it with you, my loyal readers – by that I mean my wife and the same Peruvian farmer who keeps asking “¿Cuál es la mejor pala?” – and pimp out a pretty killer damn cover.

First off, here is some pretty cool behind the scenes stuff. Kendall wanted a custom cover of Gavin and Zoe – your protagonists – clasping hands, so she rounded up Teresa Yeh to do some photographic magic. But first: bodypainting!

Some clubs require more than a stamp before you can get in.

That’s bodypainter Vonetta Barry tattin’ up Bradley Nethercutt, the model for Gavin. Looking at this, I firmly believe I too could be a forearm model. 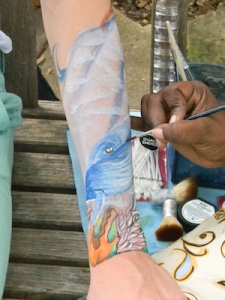 I could totally do that, and by that I mean sit still in a chair.

That’s some of the detail of the work Vonetta is doing, a whale, of course. Have I mentioned yet that all of the profits from the entire JUST BREATHE trilogy are going to whale education programs (that is, programs to teach humans about whales and their importance in our ecosystem, not teaching whales things like archery and line dancing)? I haven’t? OK, well, all profits from the Just Breathe trilogy are going to help whales. Which is really fucking cool, because all of the profits from the Northreach Saga are going to me and my plans to build an interstellar death ray to hold the world’s rum producers hostage to my insatiable thirst.

I need a crew. Or at least sycophants. Definitely need more sycophants.

This is the crew setting up for the shoot. Kendall has a crew. I have an incredibly patient wife and three dogs who go batshit insane whenever a bird flies past the house or the wind blows or fails to blow.

What we’re seeing here is the Classic Clasp method of handholding, as opposed to the Interlacer or Thumb Hook styles. Very classy.

The models for Zoe and Gavin get ready. Zoe is being portrayed by Danielle Smith. You’ve already met Bradley Nethercutt, who is Gavin. He does have a shapely forearm, I’ll give him that. 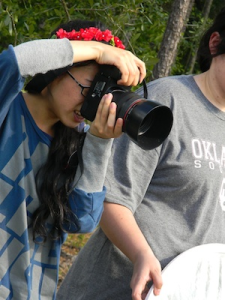 And the chosen photograph:

That’s hella cool, actually. Much cooler than the word “hella”.

Kendall liked this one the best, so it was time to bring in the closer: Claudia McKinney from Phat Puppy Art. Through the mysterious and powerful arts of modern digital design, she added an ocean backdrop and a whale fluke, plus a heapin’ helpin’ (Kendall lives in Georgia, and I believe that is the only accepted unit of measure there) of creative mojo and finally… BAM. Cover reveal in…. I’m totally stoked for Kendall. This week, INHALE, the first book in the trilogy was released. And you bought it. RIGHT?! If not, I’ll forgive you, provided that you click now to get it on Kindle, Nook, or paperback. Book 2, EXHALE, should be out in early July. Yes, you only have to wait a couple of months to get the second one, unlike some lazy hacks I could mention who are still trying to get their sequels out over a year later (whistles innocently). And now she gets to reveal the cover art for the final one, JUST BREATHE, which turned out to be killer and is scheduled to be released in August. AUGUST. Criminy. She’s getting an entire trilogy out within months of each other. If I didn’t like her so much I’d hate her with every inch of my being. She makes me look bad. OK, I make me look bad, but whatever. Don’t judge me.

Remember, ALL THE PROFITS ARE GOING TO WHALES, for chrissakes. Well, not whales directly, because of a lack of shopping options in the ocean, but you know what I mean. All shitty jokes aside, that’s an awesome, amazing thing, because putting out novels and dealing with all the publishing aspects of it is plain murder, and Kendall isn’t doing it for fame and fortune – well, not fortune, anyway – and instead is doing it for something really awesome. For fuck’s sake, drop three bucks on a digital copy, because instead of a shitty overpriced coffee from a major chain of “artisans”, you can get a great story and help the coolest mammals on the planet that aren’t Colby Donaldson.

Posted on May 4, 2012, in Kerfluffle and tagged Pimpin' for Writers Who Deserve It, Writing. Bookmark the permalink. 9 Comments.

← It’s Time to INHALE, Everyone. My Twinsie’s Book is OUT!
The Tactical Guide to Snake Plissken’s Hair →