My Day As A Crackhead, In Photos

I wrote a while ago about playing Crackhead For a Day as part of a law-enforcement training program run by the fine folks of Center Mass Combat Tactics. Now that my failed foray into NaNoWriMo is over, and I don’t particularly feel like doing various reconciliations of various dollar amounts in various categories, I am pleased to present to you some pictures of the event.

So after we meet up with the trainers and other volunteers in a parking lot, we all pile into pickups and take a ride up a dirt road to our crackhouse. As we round the bend, we see this lovely structure in all its glory:

It needs a little work.

Yep, it’s a real, honest-to-God shithole. Dust and mildew and trash and old blankets and all kinds of awesomeness are inside. The group of people who are milling about in the photo are the Distraction Team. They are supposed to represent a group not involved with the search warrant, but are close by, as a test to see if the officers get distracted from their main goal, which is the apprehension of a wanted person whose description they have. They didn’t have to go into the stinkbug infested deathtrap. I’d call them the Lucky Ones. I wasn’t among their number. 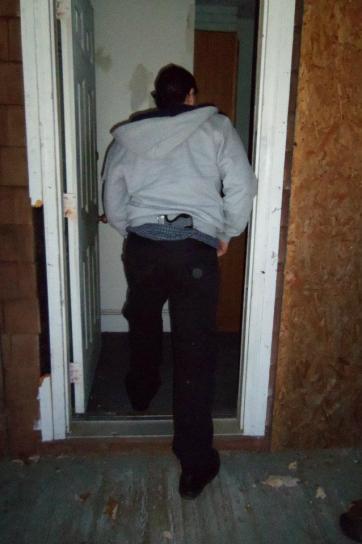 It's my best side.

Notice my fashionably baggy low-ridin’ pants that show off both my underwear and the pistol I was carrying. Not pictured: the wife-beater and leather cap, but you’ll see them in a bit. I was on my way inside to scope out a suitable hiding place from the po-po (CHECK OUT MY AWESOME URBAN LINGO SKILLS!). We were advised to hide as well as we could, and to make sure that someone went into the attic and basement. To my infinite sadness, no one volunteered to go into the black, musty, nasty attic, so I did. I wish I had pictures of it. It was basically a stinkbug nest. There were some old nasty blankets up there, and I got into the spirit of things by laying in stinkbugs between the attic planks with the least foul-smelling blanket among the three. I turned off the flashlight, and holy fuck was it dark up there. I waited, heart hammering and breathing hard as the officers broke in downstairs and started yelling. Eventually, they found me, and I got yelled at and patted down and cuffed while I said polite things like “Fuck off” and “who’s fuckin’ your wife right now, pig?” Believe me, there are very few chances to say something like this to a police officer and not discover exactly how much of a nightstick can be inserted into your rectum.

The officers took me to the stairs, where they were kind enough to gently escort me down the steps since they didn’t want their roleplayers to go tumbling down the stairs. I was escorted to the porch where the other crackheads were gathered. I was told to get down on my knees. I did:

"Any of you still got a rock?"

Since I was still in the spirit of roleplaying, and they were still searching, I decided to keep doing my best to harass and stress the officers. “What do you need me on my knees for? Oh, what, I’m supposed to service you now? Fuck it, ain’t like it’s something I ain’t done in prison before.” My captors tried not to laugh. It was a good time. Again, never again will I be able to say that to a police officer. I’m OK with that.

After that came the recap. We stood around and listened to the critique of the officers’ performance. They didn’t do everything right, but that’s what the training was for. As an example, despite being patted down, they didn’t find my gun, because I had it down my baggy-ass pants and put my cuffed hands over it. I felt bad for the guys, but I knew they were learning something from this.

Kickin' it wit' ma homies, yo.

Yeah, that’s me, in my short wife-beater than didn’t cover my stomach, boxers showing, leather cap rocking. Several of the officers were quite amused by my appearance. I think I made it that much more convincing by getting liquored up the night before and showing up hungover as a motherfucker without taking a shower. Still, I’m smiling, so it must’ve been a good time. 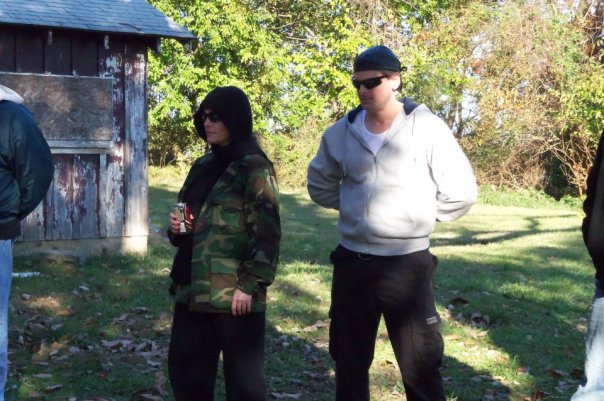 Bitches representin'. Uh, word, or something.

Of course, no crackhouse is complete without a crack ho, and my wonderful wife was there, looking resplendent in her camo jacket and hoodie. She got to stay outside. Honestly, that’s for the best, since her allergies would have caused her lungs to leap out of her mouth to strangle her sinuses. I’m standing at Parade Rest because I had my hand on the pistol and we were about to toss them onto the ground to show the officers how many they missed. Plus, I like standing at Parade Rest.

After that, the officers thanked us one by one before they did punishment exercises. We piled back into the pickups and went back to non-crackhead lives. I absolutely reeked of stinkbugs. It was a good day.

Posted on December 1, 2011, in Kerfluffle and tagged Crack is Whack, I'm Not Dangerous I Swear, Role-Playahs. Bookmark the permalink. 11 Comments.