I really enjoyed the movie Zombieland – it was funny, acted well for the most part, had plenty of memorable scenes, and introduced a great concept: The Rules, presented as an ironclad set of laws designed to keep a person alive during a zombie apocalypse.  Many of them I agree with or have no problem with: Check the Back Seat, When In Doubt, Know Your Way Out, and Hygiene are all great rules.  Some of them, though, can be somewhat misleading in my opinion, and that includes the very first rule: Cardio. 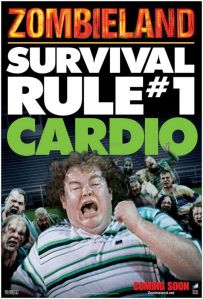 I understand the premise, illustrated in the film by the scene where a large fellow (pictured here on the left) is run down by a pack of ravenous corpses, as well as Columbus himself running in a wide circle to give himself time to unlock his unlocked car door (maybe a rule like Lock the Door would be helpful) while a pair of zombies scramble behind him.  The scene is funny (although much of it is based on the HAHA LET’S WATCH THE FATTY TRY TO RUN brand of humor, with its cool callousness) and illustrates the relatively slow-moving zombies (much quicker in Zombieland than Romero’s type, but still slightly slower) having trouble keeping up with a person at a jog.

Cardiovascular endurance is a Good Thing, even outside the context of a zombie apocalypse; I won’t deny that a bit.  I’ll even go so far as to say that it’s incredibly important.  It does, however, raise a critical (to me) point: Cardio itself isn’t going to cut it, not by a long shot.  Cardio is good, but cross-training is better.

I’ll go ahead and disagree.  First, there is the example the movie provides: fat guy run down, skinny cardio guy survivor.  Columbus, the main protagonist portrayed by Jesse Eisenberg, is seriously skinny, both before and after the apocalypse.  So, to me, it implies that Cardio alone (well, and stretching, but that’s a different rule) is the way the rule is intended as well as written.  The ability to run long distances is Rule No. 1, based on the evidence we have.

In a real zombie apocalypse, that rule will get you eaten.  Maybe the benefit of not giving the zombies much to chew on will be a nice spiteful right-back-atcha type of gesture.  That’s about all it will get you.  Focusing on cardio alone will kill you, because that focus will cost you something just as important, if not more so: muscular strength.

Now, I’m not arguing that a super-muscular build is going to save you.  Not at all.  I’m not talking about body builders.  I’m talking about overall fitness.  A survivor in a situation like this is going to have cardiovascular endurance and strength to survive.  No two ways about it.  Here are a few reasons.

Ask someone what weapon they want during a zombie inva – SHOTGUN!  See?  You can’t even finish the question before the eager answer jumps out.  Well, let’s think about that shotgun for a second.  It’s a little bulky.  If you are in a situation where zombies are around, you won’t have it slung over your shoulder.  You’ll need to carry it.  Let’s say the shotgun weighs around 7 pounds.  That’s light!  That’s easy to carry!  LET’S SHOOT SOME ZOMBIES YEEE-HAW!

Do me a favor.  Carry something around with you that weighs about the same.  Not bad.  Feels real good.  Keep it held and walk around for a couple of hours.  Then a few more.  That kick-ass zombie-killin’ weapon is going to feel awfully heavy if you haven’t been working out those arms a bit beforehand.

Now imagine that you’re carrying that around and a Zed pops out and grabs at you and you need to push them away.  Let’s say this male adult zombie weighs about 160 pounds (we’ll lop some off the average weight to account for the eaten parts).  That is not an inconsiderable amount of weight.  Yes, adrenaline will help you, but it can only go so far, and if you’re engaged in a long escape then your reserves of fight-or-flight juice is getting pretty worn out.  Yes, the zombie is uncoordinated and easier to topple, but it’s also supremely motivated to NOT EAT YOUR BRAIN –  ahem, sorry – to eat you, and is leaning its whole body into you to take a nice mouthful.  If you haven’t been hitting the weights at least part of the time, you won’t be able to push that sucker away from you, and you’re just another treadmill worshipper staggering around the city looking disheveled and moaning.

Another scenario.  Your door is being busted in, and you need to nail some 2 x 4s up stat.  Ole’ Columbus looks like he’s good for maybe 3 smallish pieces of the stuff, and there’s no way he’s moving anything heavy in front of that door.  He certainly can’t hold it shut while someone else does the work, since he’s not strong enough.  The best thing he can do is hope he can lightly jog in a circle long enough that an avenue of escape is opened by someone else.

Taking an axe to the door?  Forget it.  Prying open a locked chain with a crowbar?  No way.  Pushing an advancing zombie down with a shovel to the chest before decapitation?  Impossible.  Unless you’ve been cross-training.  Have to feed those muscles, people, or else you’ll be feeding your friendly neighborhood pack of bloodthirsty undead.  Hey – it’s your funeral.

Rule 1: Cross-training.  Fitness.  Call it what you will, but Cardio ain’t it.