← A Serpent in the Citadel, Chapter 7: Taking a Few Shots
Where Do We Go From Here? →

At E3 this year, EA dropped a new trailer for Mass Effect Andromeda. It doesn’t explain anything, doesn’t show gameplay, and isn’t everything that I’d hoped would be released (by which I mean I want to know everything RIGHT NOW like the impatient petulant child that I am). There were, however, some clues and hints about what’s to come. I need to talk about it, just to keep myself sane, so this is just going to be a scattershot of thoughts and speculation about what’s to come.

What we think we know: So it looks like we’ll be playing as Ryder, a human. It also looks like they’ll be using the female version of Ryder (fitting, since Shepard was a reference to the first American man in space, Alan Shepard, and the first female American in space was Sally Ride) in the marketing, which I think is a great choice. Jennifer Hale’s turn as FemShep deserved all the promotion last time, so it makes sense to start there. Taking advantage of the dearth of games led by female protagonists is a step in the right direction, too. The more non-sexualized female protags we have as the face of major gaming franchises can hopefully kill off this last remnant of GamerGate douchenozzles trying to keep gaming a little boys’ club and make it easier for women to see gaming as something that includes instead of trivializing them. 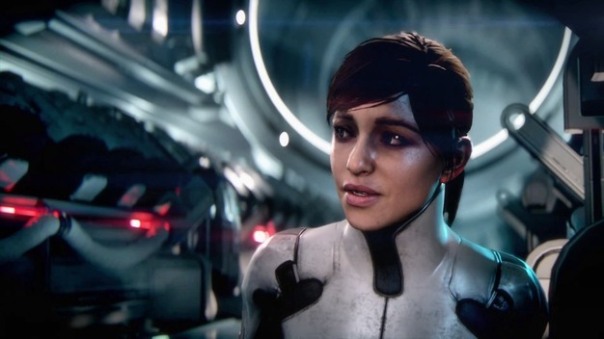 This is what incremental progress looks like. I’ll take it!

Speculation: Not much yet to speculate here. We’re human and in the Andromeda galaxy. Signs point to a lack of experience and a Hero’s Journey in store, as opposed to Shepard’s pre-existing status as one of the most accomplished soldiers in the Alliance before the start of Mass Effect.

What we think we know: Mass Effect is a good third-person shooter. What it excels at, however, is characterization and interaction. The good news is there are some familiar races taking the Ryde (see what I did there?!) with us. We’ll definitely have asari and krogan there, and speculation about a silhouette in other images suggest the salarian as well. 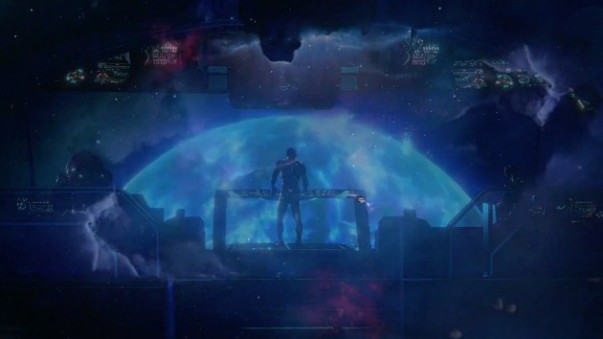 The shadow on the far right sure looks like a salarian.

Speculation: Turians and quarians will be around, because if they aren’t I will burn the Earth to the ground threaten bodily harm whine about it online.

What we think we know: We are in the Andromeda galaxy looking for a new place to settle and provide a home for humanity and possibly other Citadel races, long after the events of the first game.

Speculation: There is a popular theory about the end of Mass Effect that posits that, during the Reaper invasion, an Ark was launched when all hope seemed lost. It’s called the Ark Theory, and claims that the Protheans or another ancient race built what is essentially a one-way mass relay to the Andromeda galaxy. Humanity worked on it and kept it secret, eventually inviting tight-lipped experts from other races to work on it as well after the events of ME1. While Shepard battled the Reapers, the project continued at an accelerated rate, and when Shepard is thwarted on Thessia by Kai Leng, the Asari Councilor says, “There are preparations to make. Continuity of civilization to consider.” The theory says that this is a reference to the Ark, and the flotilla made up of supply vessels and transports and whatnot are prepped and ready. During the assault on Earth, when all seems lost and contact with Shepard is broken, Admiral Hackett gives the order and the flotilla goes through. The aftermath of the end of ME3 (no matter which ending happens) destroys the Ark, so those people in Andromeda have no idea what happened at the end of the game and therefore it has no impact on them, which is a nice way of not having to deal with the choices at the end of the Shepard trilogy.

Other Thoughts and Speculations:

I still believe in the Indoctrination Theory (as an explanation to the end of ME3, not necessarily that Bioware had it planned all along. It’s my head canon). In my pipe dreams we get DLC that allows us to play as Shepard one last time to get the real canon ending to what happened in the Milky Way so they can use that ending as the lore of the galaxy going forward.

It’ll never happen, unless I become a trillionaire and make it happen. Fingers crossed!

Speculation: There will be a mini-Citadel that serves the same function in the new game, a metropolitan center with an arrays of races and conversations that you can bust into and give your two cents on without anyone asking for it. I think this image from the trailer is it:

“Excuse me, my name is Ryder, and I have strong opinions about how to name your child.”

We will get to drive the Mako around, which I’m looking forward to. I HATED it in ME1 and thought it was so annoying, than I did planet scans in ME2 and I quickly grew nostalgic for the Mako. Now when I play ME1 the Mako is one of my favorite parts. Go figure.

I think there will be a big dump of info and stuff on N7 day and I can’t frigging wait.

Specualtion: There will be a side adventure where Corrigan Blake, escaping the Citadel, winds up on the Ark flotilla because Madeleine sent him there to pick up some dry-cleaning, and Ryder has to team up with the galaxy’s foremost noir detective and quarian romance novel lover to solve a case.

OK, that one’s only slightly more likely than getting the Indoctrination Theory confirmed.

Posted on June 14, 2016, in Kerfluffle and tagged Bad Predictions, Gaming, Mass Effect is the Strongest One There Is, Nerdery, Theories. Bookmark the permalink. 5 Comments.

← A Serpent in the Citadel, Chapter 7: Taking a Few Shots
Where Do We Go From Here? →